Just received my CMR KF60s. Nice models but there's a problem … they are supplied with decals but no guide as to how these should be applied. Google is not providing any suitable images ( haven't started ploughing through my library yet). Does anyone have any images showing lettering? Are there differences between those at coal mines and ones which appear on CNR? I've put a photo on my blog (https://nihao87.wordpress.com/blog/) - but it's almost impossible to see due to the decals being white on white.

Mark,
Had a look at the KF 60 chapter in Vol. 2 of the Chinese freight wagons book.
A lousy shot of a KF 60, but one can work out something from this shot.
Left hand end of side, first panel, panel being space between side stiffening ribs, No. 1, obviously No.1 car end, so assume that there would be 2 in the equivalent panel at the right hand end.
Next left panel, two lines , writ small, probably load capacity and empty weight.
Next panel, KF, perhaps 8 inch figures, Next again, 3 figure number starting with 6, car number, perhaps 8 inch also.
To further end, right hand end, as above, end number, should be 2, second panel in, looks like a vertical line of figures, possibly inspection dates etc.
The next section in from the R.H. end, section being the space between the latches, there are six panels, five of which each have a single large character, but unreadable.
No sign of the China Rail symbol anywhere, the five characters suggest an industrial ownership.
Hpe that this is of some use, no doubt others will come up with clearer photos of KF 60's.
Regards,
Bill,
Melbourne.
Top

Thanks for that. I'll try and decode the transfer sheet to see what I've got! Have updated my blog with better pictures.

Have done a trawl of images in books and SY country with mixed results. No totally clear image and there seems to be quite a bit of variety. Need to do some more work.

I wonder whether this is something CMR intend to continue to save selling different part numbers.

Mark,
The letters KF would probably have a small 6o suffix.
The comments that I made must still be considered rather rubbery, the photo is small and on newsprint quality paper, so not too clear.
Possibly checking with an open wagon would give an idea of what are the usual goods vehicle markings and where they are located.
Regards,
Bill,
Melbourne.
Top

Anyone got a clear side on shot of a KF60 please?

Yes I have taken many photos of normal China Rail tank cars, box cars, gondolas and flat cars with modelling / weathering in mind but never any KF60's.

TBH they are usually so heavily 'weathered' that you hardly notice the lettering. I'm tempted to heavily wether them and not bother with the decals at all!

If I do decal them eventually it will only be on the viewing side!!!!!!
Top

I have managed to track down (no pun intended!) a few photos of KF60's in industrial use - all are copyright (not mine) and used with the photographer's permission but please don't use them elsewhere. 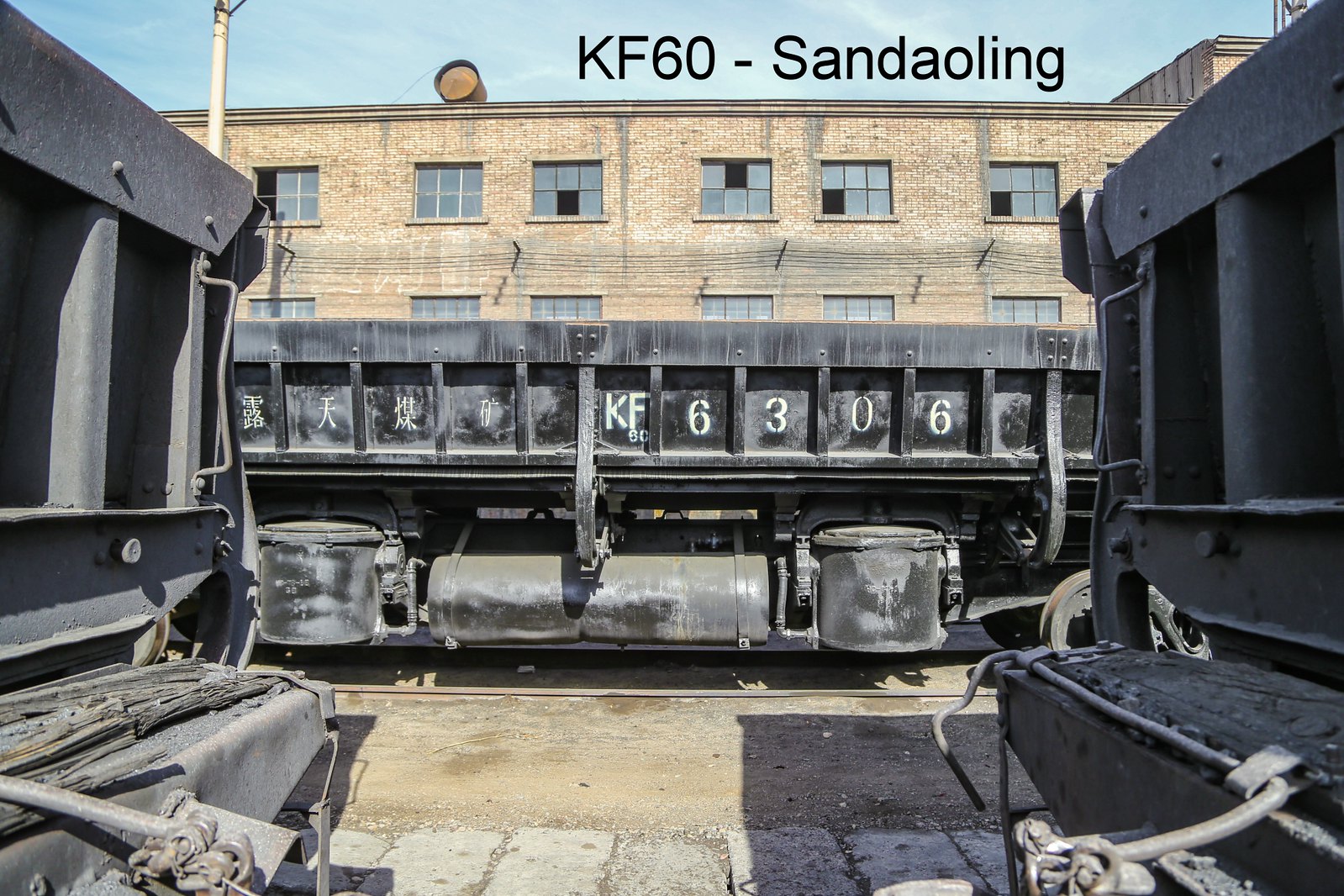 Have been working on the first of 12 KF60's - lot's of work and so definitely will only be painting weathering one side!!

It still needs a bit more weathering on the underframe, but 95% done!
Top

More KF60 photos (from other webpage)